Two weekends when I looked in the nucs, the one I thought was doing well had half the top frames filled with groceries, the rest were bare. The nuc I thought had been robbed clean was jam packed with honey and pollen, probably enough to get the colony through the winter.

As I went to put the entrance reducers on the big hives I got stung 8 times on the back of my hands. Although I was wearing gloves, they were not the correct gloves for the task at hand.  PPE only works when its the right kind and worn properly .

I figured I might be in trouble a few minutes later when the bottoms of my feet started to itch. Went inside, hit myself with an EpiPen and had a big gulp of Benadryl. Sat down on the couch and waited for the magic to happen. After a while got up to get a drink of water and couldn’t swallow it.

Off to the hospital I went. Didn’t have to wait too long before I was given a comfortable spot to lay down on. They hooked up the monitor machine and after 4 tries at getting a BP they went old school and did a manual – seems that I wasn’t supposed to be sitting up talking with BP as low as mine was.  I lived an “interesting life” in my younger days which probably helped me there.

They gave me more epinephrine (adrenalin) and Benadryl. Had a wee nap thanks to the combination and everything stabilized. After a while they came in and told me they’d like me to be their guest for the night but I declined, having 2 dogs waiting for my return. Got a new prescription for epipens and thanked them for likely saving my life.

So the beekeeping season came to an end today. Removed the last of the feed cans with 2:1 syrup and duct taped the seams of the topmost boxes of the 2 nucs the ladies didn’t get around to propylizing.

The beehive stand had developed a list to the back, meaning any water that might get in would go to the rear and puddle there. Wet bees don’t stand a chance of .making it through the winter so I made a couple braces to level the stand.

After my last experience I was doing all this in my bee suit so things went slowly.  As a wise man once said, if you don’t make time to do it right, you best have time to do it twice.

Hives leveled, feeders removed, seams taped, all that was left was lay some batting in the top of the well provisioned nuc, and lay a layer of paper covered with sugar on top of the lean nuc to provide moisture control and food.

Now for the hard part. Waiting for winter to break so I can once again look in on the ladies and hopefully discover that they all made it through the winter and are as ready as I am for spring to bring the cycle of life around again. 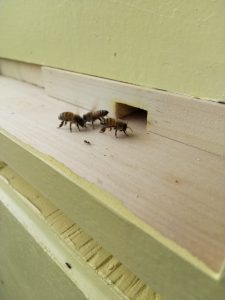 7 Replies to “Buttoning things up”