One day last week i was walking past the hives and noticed that there was a lot of traffic around both of my NUCs (a NUC is a small hive used for making a new colony).

I had added anti-robbing screens 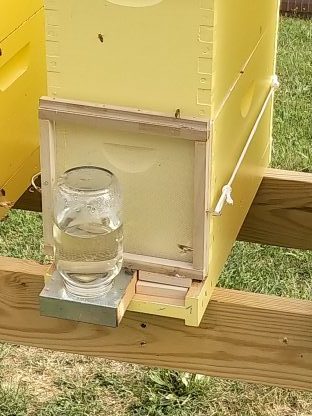 to both NUCs to help the small colonies keep what they had worked so hard to put away. Robbing is where bees, wasps etc who don’t live there come and steal what the residents worked so hard to store away for winter. The small piece to the right of the jar (a feeder) can be removed. It was out of place and there were bees coming and going through that opening instead of climbing up the hive body and out the opening at the top of the screen.

I pushed the misplaced pieces of wood all the way into the hive openings and continued about my day.

At 3:15 this morning i realized what i had done – completely closed the openings to the NUCs!

By 3:30 i was out there, pretty much dressed, flashlight gripped in my teeth, removing the screens, feeders, and small pieces of wood, replacing them with simple entrance reducers.

You would thing that at 3:30 in the morning with the temperature under 60 the ladies would be blissfully asleep or at least lethargic enough that my bumbling about wouldn’t bother them. This was not quite the case. One lady really didn’t like my poking about in the dark and buzzed around telling me all about how she didn’t appreciate being woken up, the door to her house being ripped off, some wooden monstrosity shoved in its place, and how her sisters just don’t listen…

Of course there’s no going back to sleep after early morning gonzo beekeeping so i had time to breakfast and write this missive. Hopefully they didn’t consume lots of the winter stores while shut in the NUCs for many days. Might have to feed these two. I’ll check in a few days when i can look when there’s light outside.